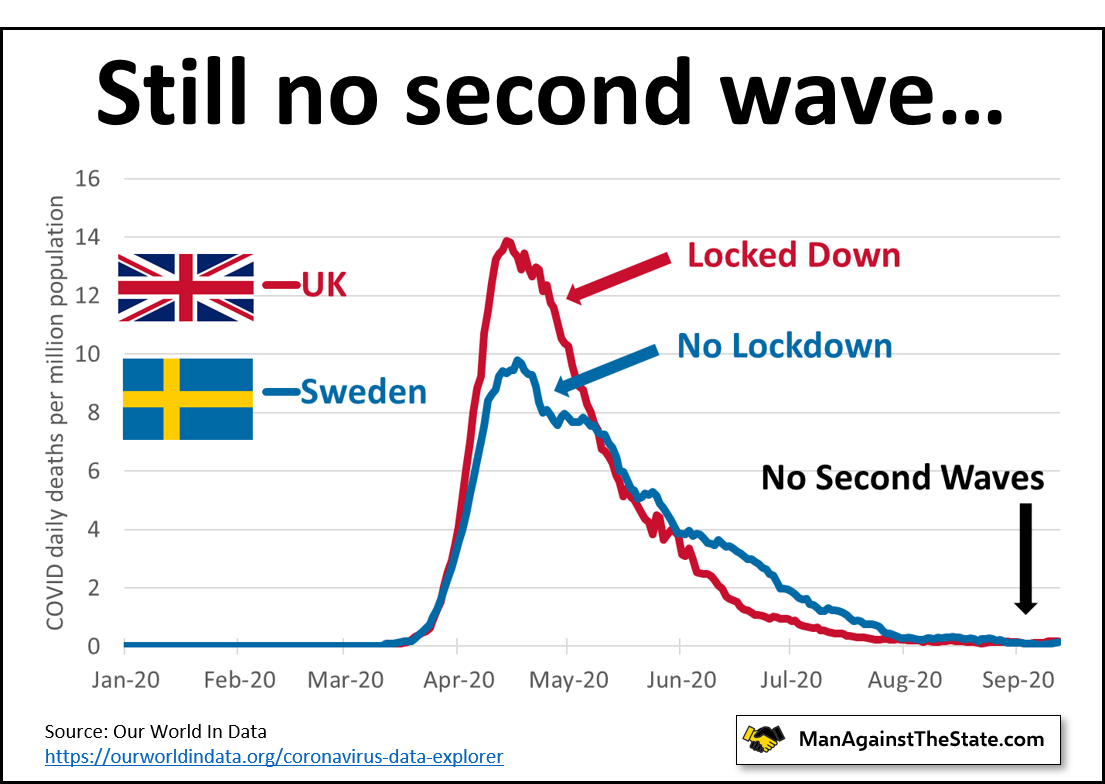 In the absence of global government (for now), we have the opportunity to learn from how different national governments have responded to the Covid-19 threat.

The UK vs Sweden

The UK imposed one of the strictest lockdowns in Europe, while Sweden did not lockdown at all. Here are the charts for daily deaths per million population for these two countries:

Lockdowns were sold as a way to “flatten the curve” to “protect the NHS” in order to “save lives”. The comparison to Sweden shows that the lockdown did not flatten the curve. The two lines are the same shape: rising at the same time, peaking at the same time, and both falling to almost zero by the beginning of August. The only differences are the peak (UK 40% higher) and the slope of the line downward from the peak (UK fell slightly quicker).

We are faced with the prospect of a second lockdown, in response to a “second wave” that the media have been fearmongering about for months. The first lockdown saved very few lives, if any, from covid. However, this evidence is apparently being dismissed and the dials of tyranny are being turned up again in the UK: meetings of groups above six are banned from this week. Lockdown is no longer to be thought of as a binary, but a sliding scale of tools the state now has in it’s toolbox to control people based on the “disease threat level”. It’s an upgrade to the old “terrorist threat level” idea, which has become stale.

Ever since the Cummings incident and the BLM protests/riots, we have been told that a second wave is right around the corner and that we citizens are to blame for it… because we were naughty and did not do as we were told. We were told that people flouting social distancing rules, gathering on beaches, going back to pubs and restaurants, refusing to wear masks, and other expressions of liberty now forbidden or frowned upon, would lead to a second wave. None of these things led to a second wave.

There is no sign of a second wave in either the UK or Sweden, according to the death rates chart. This explains the shift in propaganda messaging from focussing on deaths to focussing on cases. It is no longer about saving lives or protecting the NHS, but about “slowing the spread” of the virus, measured by case numbers.

Even if there is a second wave coming now, those imposing the lockdown can be confident that the public will continue unthinkingly accepting the pronouncements of the men in white coats. Just like in the Milgram experiment, most people will follow an order from an authority figure even when it goes against their own moral code and would be needless and cruel in normal circumstances. Most people will continue obey every command from the authorities: “keep your distance”, “small groups only”, “wear your mask”, “let us track your movements”, “take the vaccine”, and so on.

The general public must continue to believe the lie that they are too stupid to think about these subjects for themselves, and so have no choice but to slavishly follow the commands of the expert scientists the authorities have chosen to present. Most of them won’t question the rules (except to moan about inconsistencies and exceptions, as designed) and they certainly won’t question the goal.

Slowing the spread is the wrong goal

The strongest argument for trying to prevent the spread when the outbreak first occurred was the uncertainty. There was a chance the NHS might get overwhelmed. Now, there is far less uncertainty. We know that the disease is mild, along the lines of a bad seasonal flu, that it did not spread so quickly that it overwhelmed the NHS, and that lockdowns saved no lives. We also know by comparison with Sweden that trying to slow the spread of the disease turned out to be the wrong strategy. The best way to protect those at risk from covid is for the virus to spread quickly among healthy people. Once you have had the illness, you are no longer a threat to grandma.

The so-called “herd immunity” approach was taken by the UK government until the March u-turn, when social distancing and then lockdown were imposed. It was the approach used in Sweden all along. Once there is a high level of herd immunity, the vulnerable are better protected. The data show that Sweden got it right, and the UK (and most every other country) got the strategy wrong. Now, it is time to learn from the mistake and stop trying to slow the spread the virus.

(Herd immunity relies on immunity developing after having covid-19. The evidence so far suggests that those who suffer from covid-19 do indeed develop immunity to it and cannot catch it again. This immunity will probably last for many years, if not decades. See my post: How long does immunity to SARS-Cov-2 last?)

Cases are the wrong metric

Case rate charts are being used when fearmongering for a second wave in the UK. This chart compares the daily case rate for the UK and Sweden:

We can see from the Swedish line that the number of cases is not closely related to the number of deaths: deaths peaked in April and were down over 60% by June, when cases peaked. The following chart shows deaths-per-case:

In both countries, the number of deaths-per-case has fallen from a peak of around 20% to less than 1%. This could be due to better treatment or a difference in the population being diagnosed over time: more vulnerable people were hit sooner, and now most cases are in young and healthy people. It could be due to different testing policies.

Here is a chart of covid daily tests-per-thousand population in the UK and Sweden:

It is unsurprising that the number of cases has risen, given the increase in the number of tests. Case numbers can easily be manipulated by changing the number of tests, who gets tested, what type of test is used, what thresholds are used to define a positive result, and so on. When there is a divergence between the trend in cases and the trend in deaths, it should be the death chart that is considered more reliable.

There is no second wave until evidence for it appears on the deaths chart, and so far that hasn’t happened. It may happen, particularly after administration of this year’s flu shot, given the likelihood that the flu shot weakens the immune system to coronaviruses.

According to the data, the first lockdown did not save any lives from covid. We know it claimed many lives through deaths of despair, and will claim many more due to delayed medical diagnoses and postponed procedures and appointments, for example. It also wrecked the economy (although the effects have mostly been kicked down the road so far) which will cause a load more deaths, as well as poverty and reduced standards of living.

A second lockdown will be just as ineffective as the first, and even more destructive to lives and livelihoods. There are no good arguments in favour of a second lockdown, but unlike with the first lockdown, now the people do not even need to be given arguments or reasons or justifications. They will accept and support a second lockdown and do as instructed by authorities, regardless, and shame those of us who don’t. That is the power of the state’s propaganda machine.