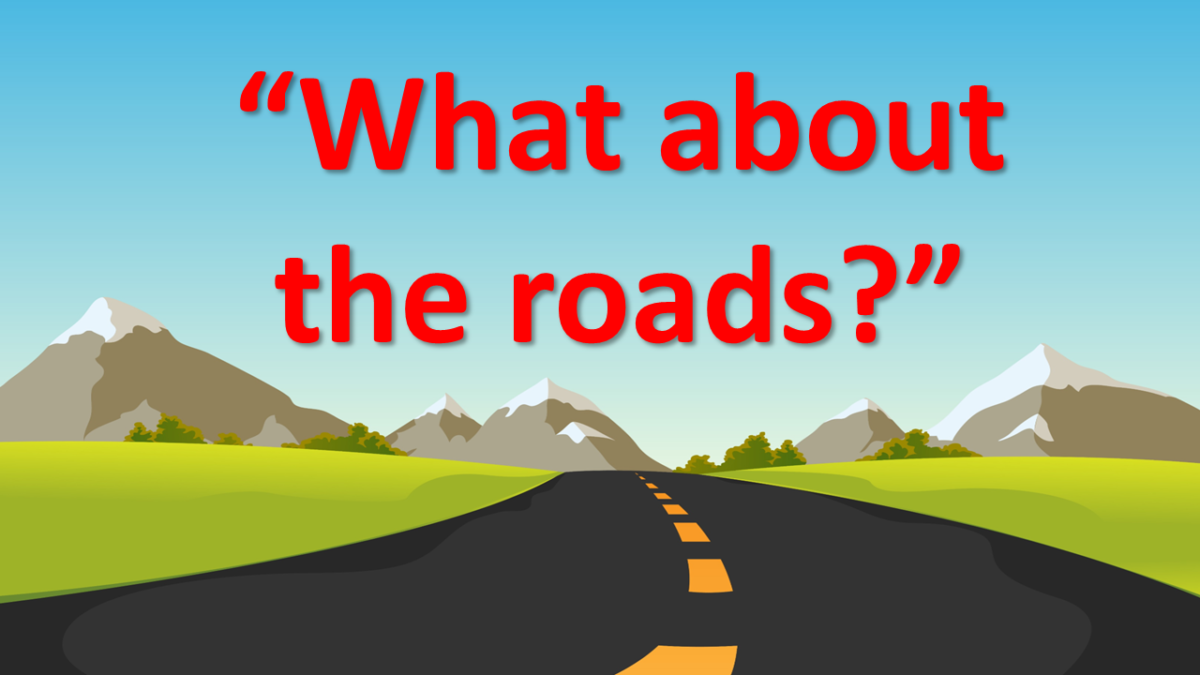 Roads. They are at the top of the ancap bingo card. When a statist wants to challenge an anarchist, roads is often the go-to topic. Statists just can’t seem to get their heads around how a free market in roads could possibly work.

I have great sympathy. Shortly after I first encountered anarchism, I made a genuine post in an anarchist forum titled “How would roads work without a state?”. I couldn’t get my head around it, either.

Once I eventually did get my head around it, I could see the great benefits to having a free market in roads, and the great costs of what we currently have: road socialism, all roads owned by a monopolist, the state. Because it was such a mental stumbling block for me, and because I have been asked about it so many times over the years since, I think I am reasonably good at responding by now.

Below is a conversation I had with someone (call him J) in a mainstream politics Fb group. It was unusually pleasant and constructive, so I thought it was worth pasting here for posterity.

J: what about the roads?

G: Roads would be much better if the state had nothing to do with them.

J: so who runs the roads?

G: Whoever wants to own a road. I expect local communities will want to own local roads, while road entrepreneurs will want to own larger roads. Either way, because they bear their own costs, they will have a strong incentive to make them safe, efficient, and good value for money. You wouldn’t get backhanders to road contractors or roadworks for miles going on for years. A business wouldn’t be run like that. Only the state can get away will delivering such poor road service, because they have a monopoly.

J: so would an entrepreneur buy the M4, for example?

G: We can’t know until we try it. We need the market to discover the best way of doing things.

J: do you think it might be a teensy bit chaotic if you try it without working out how it works?

G: How could you find out what works without trying it?

G: Right. And we know entrepreneurs do both of those better than states.

J: so, would they buy the whole M4? Or just a stretch of it? How would it work?

G: The thing about freedom is, you don’t know how people are going to use it. I can’t answer your questions.

Imagine all restaurants were state owned and I proposed a market for restaurants. You would ask me who would own the restaurants, how many, what would they sell, what prices would they charge, how will people pay, etc. I could not have answered those questions, and yet the restaurant industry works fine. The market works these things out. It is an optimisation process. The market has given us plenty of restaurants, but not too many, they are well run, and there is a quantity and variety that reflects supply and demand. From our perspective, it seems silly for someone to worry about what will happen if restaurants were not state owned.

Same for roads. I can’t predict the outcomes of freedom, but we know that markets and entrepreneurs figure things out and do a much better job of it than states.

J: I can see an argument for turnpikes, where people pay to use a stretch of motorway. But you seem to be advocating the same approach for all roads. Do you think that is practical?

G: It will vary depending on the road. I expect most roads will be free for car users, and road entrepreneurs will make their money from lorries, service stations, advertising, etc.

J: interesting. Has your idea ever been implemented anywhere?

G: Historically roads were built and run privately, and there was competition between road owners. It is known as the turnpike system. It declined in the 19th and early 20th century when the state gradually monopolised all roads. It is similar in other industries. A few generations later and people can’t even imagine what a free market in roads would look like. The benefits would be huge though: cheaper, quicker, safer roads, saving much money and many lives.

J: wouldn’t a private monopoly over the M4 mean that the owners charged as much as possible to people travelling between London and Swansea?

G: No, it would depend on many things.

First, who owns the road and what their goals are. They may not be a profit-seeking firm. I expect a typical city street would be owned by the residents. They won’t want to charge guests or delivery vehicles to drive on their street, or be charged each time they use it. They won’t think of the street as a profit-making business. I expect they would pay for road maintenance through a monthly fee, like a ground rent, contracting for services. This business model probably wouldn’t work for the M4 though.

Second, suppose the M4 is entirely owned by a single profit-seeking firm. As I said before, they may well not charge car-users anything at all. Their business model may be to charge lorries (they do a lot more damage, and are easier to collect from) but make it free for cars. They might arrange it so they get a cut of sales made at service stations, or businesses in the locations along the road. They might use more advertising boards. In this case, they would be foolish to charge any fee to car users, because they want as many customers as possible using their road.

Third, suppose they do charge car users. I expect the price would be lower than what you currently pay in car tax and petrol tax for driving from London to Swansea, due to competition with other roads and other forms of transport. This would make the profit-maximising price lower than the monopoly price we are charged today. The state sets their price (tax rates) as high as they can without causing a riot, while in a free market, the amount that can be charged is limited by competition.

Fourth, I expect there would different prices for different times of day. As a monopolist, the state has little incentive or information to set their price where supply meets demand. As a result, for most of the day, most roads are fairly empty (demand << supply), but at rush hour you get traffic jams (demand >> supply). A profit-maximising business would use pricing to balance this out, e.g. car users pay a fee to travel between 7am-10am and 4pm-7pm, but all other times it is free. It is amazing that people just accept traffic jams as inevitable, when a free market in roads could solve it quite easily.

Finally, if supply and demand conditions are such that a road is lucrative for it’s owner (high profit margin), he has an incentive to optimise it, e.g. widen the road, and other entrepreneurs have an incentive to build a new road, or provide other forms of transportation, to compete. Road infrastructure on popular roads would improve a lot faster if they were privately owned in a free market, and there would be less wastage on projects for which there is little demand, e.g. the literal “bridge to nowhere”, and other scam road projects that the state pays for with the money it has stolen from us.

J: interesting and thoughtful, thank you. Do you think that there is any prospect of your ideas coming to fruition?